For years the decking industry has gone back and forth as to what is a “green” decking option and what isn’t. In an industry where everyone boasts their product is the best, how are we supposed to make an educated decision when buying a new deck?

Some composite decking does use recycled materials, but does that mean the boards themselves can be recycled? The majority of the time the answer will be no. Our findings suggest that the composite deck boards that can’t be recycled are made from wood and plastic fibers which are combined using bonding agents that deter any machine from separating them. END_OF_DOCUMENT_TOKEN_TO_BE_REPLACED

When it comes time to purchasing decking material, you need to make sure that you buy from a company with a commitment to sustainable forestry. AdvantageLumber.com is fortunate to be one of those companies that are authorized by the Rainforest Alliance™ to sell FSC® certified decking.

END_OF_DOCUMENT_TOKEN_TO_BE_REPLACED

Advantage Deck Tiles™ are the easiest way to enhance to look of any outdoor space. They are ideal for both renters and homeowners who are looking for a fast and easy way to renovate their apartments or home. Many of our customers say that installing their new tiles took them less than a day.

Another great reason these wood deck tiles are an ideal choice for your home? Portability. Imagine actually taking your deck with you to your new home? That’s a benefit you just can’t get with any other decking product.

Now, we are offering this outdoor flooring solution in three of our most popular sustainable hardwoods: Ipe, Tigerwood, and Cumaru.

The hardest thing about the entire process will be choosing the style that best suits your unique tastes. Here’s a brief video that showcases just how easy it is to buy and install Advantage Deck Tiles™:

Toronto, the largest city in Canada, is known for its cold climate and beautiful architecture. Being a metropolitan city with such a large population, the city council decided to create a series of boardwalks that would bring tourism to the pristine Toronto waterfront.

Fun Fact: Did you know that Toronto is actually colder than Green Bay in the winter?

Although the summers in Toronto are warm and, sometimes even hot, cold weather dominates the majority of the year. Because of its close proximity to Lake Ontario, Toronto is also a victim of lake effect snow. In fact, Toronto receives approximately 50 inches of snow from November until April.  With all of this precipitation, the city needed to find a material for the Toronto WaveDecks that would hold up year after year of treacherous winters.

Ipe decking is by far the best choice the city of Toronto could have made when choosing a material for the WaveDecks. Ipe is proven to outperform other decking materials in cold and harsh climates. When moisture is present on other woods, it seeps into the wood and freezes. The constant freeze/thaw cycles are a major reason why softer woods like pine, cedar, and thermally treated decking crack and split. In the case of composite decking, freeze/thaw cycles help reduce the workable lifespan of the material by weakening the bonds between the wood and plastic. It also aids in the retention of moisture causing the infamous mold spotting that traditional cleaners can’t get out. Over time, the weakened plastic will start to delaminate, peel, or sag significantly between the joists causing an altogether different type of wave effect.

Ipe is extremely dense and tight grained. It’s this natural density that keeps water from penetrating the surface which also prevents deep cracks and splits. Ipe is also slip resistant, which is perfect for those long winters when it can get slick outside. And how about termites? Insect infestation is not an issue because Ipe is naturally termite resistant.

Here are two videos showcasing the beauty and unique nature of this project:

The first of four WaveDecks is the Spadina WaveDeck, which sits at the foot of Spadina Avenue. This WaveDeck revamped a heavy traffic area into a waterside retreat. It connects two major parks: Music Garden and HTO. There is a 187 foot bench that can be used to gather by the waterfront, and also acts as a barrier to the lake. At night the deck is lit from below with gorgeous LED lights.

Simcoe WaveDeck was the second structure constructed. It is located to the west of Simcoe Street. It is the most artistic of the WaveDecks as it features a curve that sits 8.53 (2.6 meters) feet above the lake. This WaveDeck also has a 98.43 (30 meters) foot bench that doubles as a barrier. The curve is lined with stainless steel railings. This WaveDeck also contains LED lights to shine from below at night.

The third of the WaveDecks is the Rees WaveDeck. It is the smallest of the three, but don’t let that fool you on how unique it really is. This boardwalk is located west of Rees Street. The stairs, created from several levels, can be used as a relaxed gathering location. This WaveDeck has outer edges exposed and angled towards the lake, so visitors can get extremely close to the water. There is also a removable portion of the boardwalk used to board small boats. This WaveDeck also contains LED lights that illuminate the boardwalk at night.

There is a fourth WaveDeck in planning. The Parliament WaveDeck is expected to be completed in the near future.

The majority of these boardwalks are made of Ipe, a material meant to last throughout decades of tough winters not too mention daily foot traffic. So when it comes to your personal decking space, which will see far less traffic, choose Ipe. It will last for decades, and you won’t be disappointed. Call 1-877-232-3915 to get your free quote, or check out the links below to see more examples of Ipe boardwalks.

Lumber companies have gained a bad reputation over the years. Many people believe that since hardwood decking products originate from the Rainforest that today’s lumber companies do more harm than good.

If you spend the time to read up on recent reports from organizations such as the Food and Agriculture Organization of the United Nations, you’ll learn how sustainable forestry efforts actually do more long-term good for indigenous communities as well as the forest as a whole.

Watch this video to learn more about the positives of managed forestry and our role in it:

It might seem illogical that cutting down trees is actually positive for the Rainforest. However, the data compiled by multiple regulatory and oversight agencies show that logging’s impact on deforestation is dwindling compared to two other industries. In fact, over 80% of deforestation is due to the slashing and burning practices of cattle ranchers and farmers.

At AdvantageLumber.com, we see to it that the forest maintains its value. By working with the mills directly in Brazil, we see to it the trees come from well managed areas, and aren’t logged carelessly.

We also sell certified FSC decking materials and pride ourselves in our sustainable practices with our products. 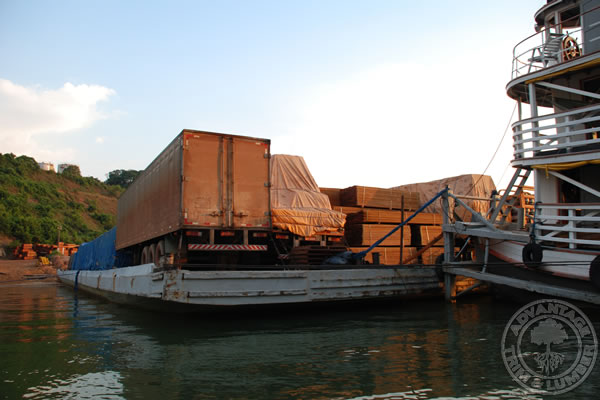 This container of Advantage Ipe Decking is one example of sustainable forestry.

One of the marketing tricks spread by synthetic decking companies is that real wood decking is bad for the environment and the overall world economy. They say that their products don’t require trees to be cut down, therefore their products are “green.” They try to profess that because their products are recycled that their decking is truly “eco-friendly.” Yet, as any logical person knows, those two things don’t correlate. Now, sure…we ARE a wood decking company. Of COURSE, we’d have a problem with those claims…

But, in this case…there are actual findings and independent reports that push back against these claims.

Want an example? Well, here’s a report from the FAO. The FAO Is the Food and Agriculture Organization of the United Nations. Click here to read the State of the World’s Forests report.

Want a summary? Sure!

Wait…isn’t forestry BAD for everyone? Not so fast. Remember, unlike synthetic materials derived from oil (an unsustainable resource, by any measure),
trees are one of the world’s most reliable and renewable resources!

Here’s what the FAO has to say:

Here’s another quote, not from some marketing guy, but from FAO Assistant Director-General for Forestry Eduardo Rojas-Briales: “Forests and trees on farms are a direct source of food, energy and cash income for more than a billion of the world’s poorest people.”

Want another from the Assistant Director-General? Here you go. “At the same time, forests trap carbon and mitigate climate change, maintain water and soil health, and prevent desertification. The sustainable management of forests offers multiple benefits—with the right programs and policies, the sector can lead the way towards more sustainable, greener economies.”

Here’s what we have to say about what it really means to provide sustainable decking in our environmental policy.

Does this information clear the air? Can you see now that decking and lumber companies that provide these kinds of material are actually contributing to the growing green economy? What do you think? Let us know. These days, being green and using eco-friendly products is more than a trend. Our whole economy is starting to recognize and value materials and items that have been manufactured and/or promote a healthy, green, and eco-savvy lifestyle. Even the recent oil spill in the Gulf of Mexico has shown us that there can be a heavy price to pay when we rely too much on environmentally problematic and damaging resources and materials.

What does this have to do with wood decking?

Here are 5 things you need to know about Green Decking: END_OF_DOCUMENT_TOKEN_TO_BE_REPLACED